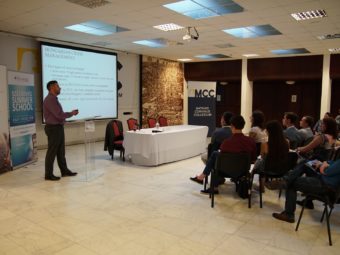 Mr. Zoltán Szalai, Director General of the Mathias Corvinus Collegium started the day with his opening speech. He said that the Visegrad Four became more respected in the world, our voice is much louder than ten years ago. He believes that the summer schools mean opportunities not to be missed for the young people to invest their time and energy, to enrich their knowledge, to become happier and smarter.

After that, Mr. Sándor Gallai, Director of the Migration Research Institute (MRI) drew attention to the conceptual confusion and fuzziness about migration; in European context the differences between migrants and irregular migrants are not underlined enough. He said that Europe still has deep problems with migration; the repatriation process is challenging, migration imposes heavy burden on the state budgets and also has a negative impact on the states’ national security.

These were followed by the panel discussion entitled „Local support instead of open borders”, moderated by Mr. Szabolcs Janik (Deputy Director, Migration Research Institute). István Kovács (Strategic Director, Center for Fundamental Rights) Marek Degro (Director, Anton Tunega Foundation) and Gergely Szilvay (publicist, Mandiner) shared their thoughts about European migration challenges. István Kovács underlined that the history of Europe and Hungary is the history of migration at the same time, but this totally differs from the movements of people we are witnessing in the 21st century, without the slightest chance of integration in the host societies. Gergely Szilvay added that migration is seen by today’s politicians as a technical issue, while it definitely requires value-based, political decisions since it has long-lasting impact on the concerned countries. According to Marek Degro, Europe must ensure that no millions of migrants leave for Europe in the future. For this purpose, help and assistance need to be taken directly to the sending regions.

The professional programme in the MCC was closed by the lecture of Mr. Szabolcs Janik. He briefly introduced the Migration Research Institute, by also mentioning the unique exhibition named „Cross-in-fire” realised with the Institute’s professional support. Following this, the Deputy Director drew up the migration history of Hungary after the system change, then explained the basic characteristics of the migration crisis of 2015, as well as Hungary’s policy responses thereto. At the end of his lecture he foresaw the continuation of the trend of restrictive policies in the field of the fight against illegal migration to Europe, meaning that the standpoint of Hungary will be adopted and followed by further Member States.