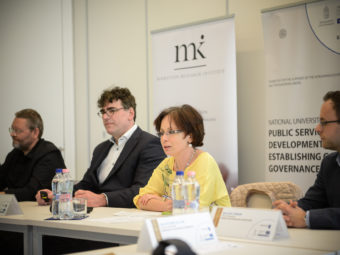 The Migration Research Institute and the Center for Strategic and Defense Studies at the National University of Public Service organized an international workshop entitled “Migration, Religion and Economy” on April 19, 2018.

The event was inaugurated by the opening remarks of Balázs Orbán, director general of the Migration Research Institute. He stated that the Migration Research Institute aimed to invite presenters who can say something new regarding migration affecting Europe, even if their standpoints differ. The international workshop also touched upon primarily economic and demographic topics that we do not talk or hear much about.

Jan van de Beek, an expert from the University of Amsterdam, approached the phenomenon of migration from the perspective of economy and public finances. His research illustrates that migration cannot be the solution to the problem of the Netherlands’ aging society, rather, it burdens public finances with substantial costs, and favors only certain market players. Considerable differences can be observed among the immigrants relative to their countries of origin in several aspects, including their qualifications, the amount of aid they claim on the average during their lifetime, and their performance in education. In the Netherlands, immigrants from Austria, Japan etc. generally perform well, but closing the gap for people arriving from Africa and some countries of the Middle East require a much greater investment. With the appearance of Islam fundamentalism, there came homophobia, antisemitism and antagonism towards the West: Some of the demographic data is astonishing. In the Netherlands, 23 percent of the newborn do not have Dutch roots.

Johan Fisher researcher arrived from the Roslikde University. He has researched the relationship between religion and the market. In his opinion, we can observe correlations between migration and the globalization of food markets conforming to the requirements of certain religions, as the supply continually adapts to the demand. Kosher, halal and Hindu vegetarian markets constantly expand in the world, and we can observe this phenomenon in several Western European countries. There are more and more kosher, halal and “meat flavor counterfeit” products on the shelves of shops in Denmark. The appearance of religion related markets is not only influenced by the behavior of enterprises and consumers, but also of the state as an actor. Naturally, all this is not free of conflicts. As an example, he described a case that happened in Denmark. Producing kosher and halal meat requires a ritual method of butchering the animal. These religious precepts conflicted with the animal rights recognized in Denmark, and as a result, a law was enacted, requiring the use of electroshock before slaughtering an animal. The minority groups concerned look at this measure as curtailing the freedom of religion.

Maurizio Ambrosini, a professor from the University of Milan presented the role of religious institutions in the process of migration. He underlined that these actors, the institutions are influencing migration policy, and play the role of an agent in the relationship between the state and the immigrants. Ambrosini thinks that the western countries would like to limit migration – which has been sort of an invasion experience for the continent – with more strict measures, even though Europe accommodates only about 10 percent of refugees from around the world. However, a stricter immigration policy often leads to illegal migrants arriving to and staying in that country, and their illegal status forces them to access resources without help from the state. This is where religious institutes come into the picture. They are protecting their own values and can provide shelter and resources for the immigrants. In relation to the question of how much the Muslim religion was institutionalized in Italy, Ambrosini said that due to the dominance of the Catholic faith, open proselyting and practice of the Muslim faith is not yet typical, it is present in a less organized form in the country.

Salvatore Villani, an expert from the University of Naples Federico II explained that the policy of governments and institutions of EU countries about analyzing and compensating for the phenomenon of migration did not bring a positive result. On the contrary: the disclosed the infirmities of historical Europe anew, including “shortsightedness in organization”, tardiness, the inability to overcome internal disputes and international animosity. At the time of the refugee crisis, the policies made the mistake of focusing on allotting expenses in relation to the emergency situation, instead of focusing on economic and social impact, and all this happened at a crucial time when inequality was expanding on the continent and new forms of poverty appeared. Some recent economic theories say that migration had an equalizing effect. However, Villani’s research indicates that migration in itself does not solve the question of inequality, since there is no clean-cut causal relation between the migration of highly skilled immigrants and income inequalities. Restructuring the tax system is still a much more efficient tool in fighting against inequality and poverty.