The National University of Public Service and the Századvég Foundation held a workshop on migration research last Friday. Dr Norbert Kiss (Vice-Rector for Continuing Education and International Affairs) opened the conference stating that events like this play a huge role in solving the problems of migration because the keys to the solution are dialogues and cooperation.

Three elements were mentioned that are necessary for a successful integration process:

It is common that only the 2nd or 3rd generations are able to fully integrate into the community but these generations are also easy to be radicalized due to their rootlessness. Yaseen Ekdahl noted that migration is seldom examined from the psychological perspective, however identity crisis can seriously hold back social development. He highlighted that migrants are not monolith, their capacity to integrate greatly depends on their personal background, education and their status in their home country.

Morten Hjørnholm pointed out that the Danish model could be able to relieve the tension as it uses the power of community to handle the problem keeping in mind the interests of the individual. He emphasised that severe punishments for not major crimes often prompt further radicalization. Denmark differentiates between the migrants already living in the country and the newcomers, and Danish policymakers feel responsible for those who were born and educated in Denmark.

The afternoon program consisted of two lectures. The chair of the session was Prof. László Csicsmann (Dean, Corvinus University of Budapest. Expert in Middle Eastern politics and international relations).

After a round of official introductions he yielded the floor to Dr Bianka Speidl (Senior Researcher, Migration Research Institute, Hungary) who talked about the radicalisation of the young Muslim generations living in Europe. She said that the experience of religion is transforming in a way that the individual is becoming its focus point rather than community. Islam as it was known is getting stuck in the private sphere. For those Europeans who converted to Islam it is their own cultural heritage. Muslim young people cannot relate to their parents’ religious practices. Their belief is individualized and westernized. It is not the same Islam as the one practiced in the origins of these people (the Middle East). It is lacking the cultural elements that made the original religion richer. Lacking these elements this religiosity relies on the literal (word-by-word) interpretation of the Quran. These facts make it easier to get in touch with Wahhabi-Salafi interpretation that is one step away from jihadism.

The means of radicalization are the self-proclaimed imams, internet and the use of English, as well as a more attractive performance to young people, which implies knowledge of their specific problems. The self-proclaimed imams using hateful propaganda are not educated religiously, but jihadist Salafi activists. The propaganda begins with videos that anyone can watch on the internet as they are not aggressive nor giving reason for prohibition. However, people who log on to a website based on these videos are getting acquainted with the ideology through chatrooms talks. The web proselytizing and recruiting therefore practically inseparable.

Mr Muhanad Selom Iraqi-born, London-based criminologist, terrorism expert (PhD researcher in Ethno-Politics, University of Exeter, United Kingdom) began his lecture with the correlations of the refugee crisis and the “Islamic State” infiltration. He stressed that although the fighters make up only a small percentage of the mass of refugees, the dangers they pose should not be underestimated, as demonstrated by the terrorist attacks in Paris. He added that a significant number of radical Shiite are coming to Europe who are coming for recreation. They are not yet hostile to Europe, although that could change any minute thanks to the substance of the Middle East settlement is on the agenda in which the Shiite interests are felt threatened.

The fight against Islamic State should be initiated where the organization’s roots are: in Iraq. After all, in 13 years the country has been a breeding ground for the terrorist organization.

Seloom drew attention to the importance of European diplomatic pressure and its absence so far. People of Syria and Iraq are looking at the people of Europe with hope, because there is no resentment about Europe in the area. The economic weight of Europe would also require the equivalent of its diplomatic activity.

The Iraqi expert mentioned the potential of collaboration with the Kurdish autonomous area and that it would have no effect on the EU’s relations with Turks, since Ankara and Erbil are in close cooperation for economic reasons.

Mr Balázs Orbán (Director General, Migration Research Institute) in his concluding remarks expressed his gratitude to the lecturers, the organisers and all the participants for such a fruitful debate on the topic of Integration versus radicalization into violence-promoting Islamist extremism. 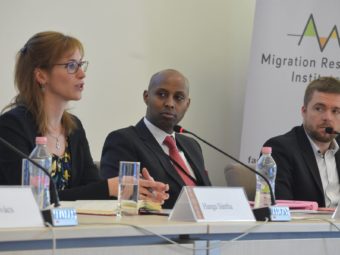