The Migration Research Institute and the National University of Public Service jointly organised a workshop on preventing violent radicalisation.

Mr Péter Tálas, dean of the Faculty of International and European Studies stressed the importance of workshops such as the current, especially taking into consideration the insufficient level of knowledge regarding the roots causes of the phenomenon . The moderator of the workshop Ms Hanga Sántha (Migration research Institute)  underlined the importance of preventative measures, not only because of the similarities in the radicalisation process regardless of ideology, but also due to the fact that the process of radicalisation leading to violent extremism has evolved and increased in recent years. Hence, preventative should include a broad spectrum of actors in the pre-criminal phase.

Mr Steven Lenos, senior advisor at the Radar Advies, commissioned by DG Home (European Commission) to manage the network of practitioners and experts involved in countering radicalisation (Radicalisation Awareness Network, RAN), gave a brief summary over the experiences and knowledge gathered by the network throughout its first five years. RAN was described as  a network of networks which supports bottom-up methods and enables practitioners and policy-experts to work together against radicalisation in Europe. Mr Lenos underlined the importance of the operative co-operation at an intra-EU level as well as with third countries, and added that results and knowledge has to be shared with external actors as wide as possible. With regards to the phenomenon of radicalisation, i.e. the process of becoming susceptible to violent ideologies and the use of violence for political or ideological purposes, Mr Lenos stress that it is a process with possible turnouts. Hence, there is no exhaustive list of indicators that would function like a check-list. The families and communities around the individuals in the risk of radicalisation are in many cases more of victims of the criminal acts committed by the extremists, therefore local  communities are key in preventing radicalisation. In relation to this he highlighted that the education system plays an important role in preventing violence-promoting ideologies and violence, because children receive a large part of their values and beliefs through the education system. Mr Lenos continued with drawing up the steps towards establishing a local network of practitioners: the first step is to identify the relevant actors and find a trustful atmosphere of communications between them. The information sharing should occur on a regular basis and not purely when a certain risk is imminent. A network should be continuously maintained like a living organism.

Ms Borbála Fellegi, executive director of Foresee Research Group also emphasised bottom-up methods against radicalisation because their authenticity and closeness to the vulnerable person ensure commitment and relevant help from the local communities, here  the civil society and the schools. From her professional experience she has been able to draw the conclusion that the radicalisation as such (adapting violence as legitimate means) is merely the tip of the iceberg. The underlying root causes may be personal grievances, traumas, lack of social security and general human vulnerabilities. An important part of the preventative work is therefore to focus on the personal stories of the persons in the risk zone. Sometimes it may be sufficient to just listen to the person in order to turn the process into a different direction. It is a basic human need to feel important and useful to society as such, hence, focusing on positive things may also be a key to success.

Mr Áron Somoskövi from the Hungarian Counter Terrorism Centre underlined the importance  of raising general awareness on the process of radicalisation. It is also important to maintain the security of the communities (of those as the radicalised person may associated with as well as other local communities), and to use the relevant methods to intervene regarding radicalised persons. From a law enforcement perspective  there is a definite need for early warnings and timely information which both require awareness raising and a well-established network of cooperation. Though law enforcement comes at the very end of the radicalisation process (when a crime or a security threat is imminent), in many cases they become the first instance due to lack of recognition and lack of sufficient tools of other actors. Mr Mihály Kovács from the Hungarian Prison Service gave a brief summary over  the situation of Hungarian prisons in relation to violent radicalisation. He said that the ratio of inmates with foreign background in Hungarian prisons is around 4 percent which is at least 10 percentage points lower than the same ratio in Sweden, France or the UK. Although Hungarian prisons do not keep track of the inmates’ religious beliefs it is assessed that a little less than 300 convicts may be associated with the Muslim faith. Inmates normally form groups on a geographical basis, rather than on a religious one. The statistics show that violent radicalisation is not significant in Hungarian prison and probation services, but it is pivotal to enhance the dialogue and the cooperation with relevant communities (e.g. the Hungarian Islamic Community) in order to increase the understanding of the own staff members, but also to be able to concentrate on early warnings, identification and prevention. A part of this process includes the careful study of international and European good practice. Another important part of the work of the Hungarian Prison Service is cooperation with other national law enforcement and national security agencies, including the Counter-Terrorism Office, the Constitution Protection Office, the National Protection Service, the National Police Headquarters and the Centre against Organized Crime To facilitate and accelerate the process of joint action towards the establishment of a Hungarian network of professionals involved in countering radicalisation leading to violent extremism, the Migration Research Institute offered to congregate all the professional counterparts working and host a first informal meeting at an operational level. 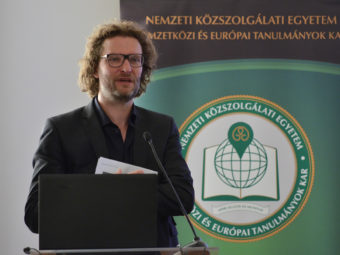