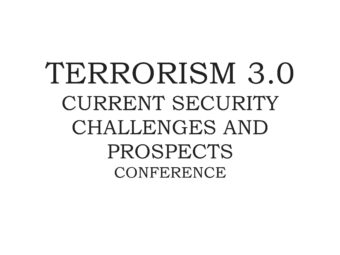 Although The Islamic State in Syria and Iraq suffered serious setbacks in the last year, it does not mean that the fight against Jihadist groups was won. Affiliates of ISIS from Afghanistan to Nigeria are still strong, controlling territories and launching devastating attacks. Regional allies of al-Qaeda are conducting assassinations in Somalia and Kenya and have the capacity to destabilize whole subregions. And though the number of large-scale terrorist attacks declined in Europe, it rapidly increased in Africa and is still unacceptably high in the Middle East.

The aim of our conference is to provide a better understanding of the current status, trends and the future prospects of terrorism in our Globe, and to contribute to the academic discussion about violent extremism by accurate and relevant analyses and lectures, delivered by both experts and government institutions.